My heart was born a radical 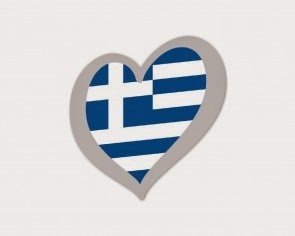 Some countries throw half their GDP at Eurovision, but even when your total GDP is the cost of a pint in Copenhagen airport you can still pull off a masterpiece.

In 2010 for example the Greeks were so skint they handed the whole business of song picking to Universal Music Europe, and then stuck their "National Final" in the Hellenic equivalent of Westfield, with an tiny audience of customers bored queuing in TK Maxx. Look closely and you won't even see any proper speakers - the sound was piped through the shopping centre PA system as she mimed in the dark.

Despite this "Aphrodisiac" was completely brilliant and the kind of song that could only exist in Eurovision - upbeat, modern, melodic, punchy, quintessentially Greek bouzouki stilleto pop that managed to rhyme "disiac" with "maniac". And if anything, this year’s entry is even better.

Stefania is a Dutch-Greek singer who for some reason first shot to minor fame as a third of the Netherlands’ act in Junior Eurovision 2016 singing something from the eighties. She then reappears with this top pop song with an extended breakup/medical treatment metaphor that contains the line “The doctors say that I took too much of your bullshit”, which might not sound like much but you really do have to hear the way Stefania voices “bullshit” to appreciate the craft here.

Her song for Europe is brilliant - again it’s something from the eighties but it’s credible enough to stand out, Eurovisiony enough to work on the night, cleverly crafted enough for the juries, has a sound that straddles both halves of the continent for televoters, and stop the clock by christ on a flying horse she can sing.

And she’s even got Fokas Evangelinos - the bloke that did that genius saucy seaside postcard performance for Moldova the other year - staging it, which may well mean we’ll get a live version of the video where one minute she’s singing in a puddle and the next minute she’s UP IN THE AIR ACTUALLY RIDING A FLYING HORSE FOR ABSOLUTELY NO DISCERNIBLE REASON.

I’m not sure it can win - Malta almost certainly have it in the bag at this stage - but this is surely nailed on for Top 5.