Not being with me is your flaw 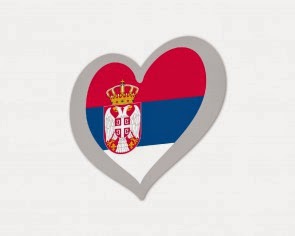 And so to Serbia, previous home of the turbofolk lego man, that man with big hair singing about his shoes, and best of all, the subversive romany lesbian that swept to victory in 2007 and caused the Belgrade mayor to have to retrain his entire police to be more "tolerant".

Serbia is probably best known for Molitva. You know - Mooooooollliiiiiiiitvaaaaa. What a tune! The English version is titled "Destiny", the Russian version is titled "Молитва" (Molitva), and the Finnish version is called "Rukoilen" and was performed by the Beauty Queens, not Marija. The song has also been released as a dance remix and another remix called the "Jovan Radomir mix" was released by Swedish TV-presenter Jovan Radomir, who also wrote the English lyrics.

This year’s entry “LOCO LOCO” is no Molitva, but it is a perfectly serviceable Balkan beach banger sung by “woman power” group Hurricane. We last saw one third-of-hurricane Sanja Vučić belting out Serbia’s rather dour 2016 entry Goodbye (Shelter), and a year later Ksenija Knežević was doing backing vocals for Montenegro’s Knez.
Now they’ve joined up with dancer Ivana Nikolić under the unlikely satewardship of Zoran Milinković, Serbian politician and president of the Patriots of the Serbian Diaspora party, for which he stood as presidential candidate in 2004.

That’s where the UK’s been going wrong! We need a girl band run by Gordon Brown. He could draft in Shakira! And we’d still come last.