Compared to you no one has anything to brag about 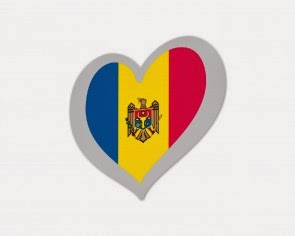 And so to Moldova, a tiny, landlocked republic wedged between Romania to its west and Ukraine to its north that, fact fans, is officially the least visited country in Europe. I can’t imagine why.

Mind you - imagine if they won it and it was in Chisinau! You'd be rattling along on the train from Romania on your way to the CHISINAU CIRCUS: THE PREMIER EVENTS HALL IN ALL OF MOLDOVA wolfing down some kind of pork dish in a restaurant car that looks like your grandma’s front room (a window framed by heavy purple fluted curtains, silk flowers, a faint smell of cigarettes and orange formica tables) when the conductor comes and chats.

"The best time in Moldova was at the end of the second world war, after the Romanians had left but before the Russians came" he says - which by my reckoning meant that the country’s glory days lasted for precisely one month. Anyway this year the Moldovans are entering Natalia Gordienko, who first popped up with sex-pest act “Arsenium” and delivered this “something for the dads” aural abomination in Athens in 2006. Amongst a slew of entries that deal with the pain of the pandemic, in this interview with Adevărul she says that the song is “an extrapolation of the current situation and the turbulent times we live in”. The isolation? The loneliness? The loss of life? Not quite.

“It was the composer’s idea and it was even funny how he told us the point from which he started in the creative process: he was in the restaurant and ordered a coffee and they brought him sugar. He looked at sugar and suddenly thought that the name of the song would be sugar and the concept would be as sweet as sugar. Then came the demo of the melody line and then the lyrics.”

Yep - Philip “Russian Simon Cowell” Kirkorov and his “dream team” of Greek songwriters have worked up the most wonderfully ridiculous “song” - a sort of filthy, squelchy pop version of the withdrawn Ukraine 2019 entry - only with an aesthetic of one of those selfie museums they have in capital cities where if you position it right you get can get a shot of someone EATING YOUR FACE OF CAKE.

It's monumental. In many ways, it’s this generation's Like A Prayer.