I’m fighting all of my demons tryna tear me apart 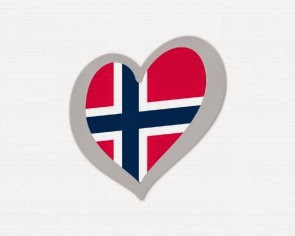 Scandipop. That's what I like. Fun, bouncy, carefully crafted caffeiney disco-pop songs that pick you up when you're having a bad day. Like Abba or Agnes or even the A*Teens. And do you know what I also don't mind from a place like Norway? Three minutes of miserable nordic noir, like this. That’s fine too.

There is something both glorious and utterly miserable about spending January and February watching Eurovision finals from around Europe. It's glorious because you end up with a Spotify playlist of about 250 new scandi hits and Moldovan shits to get you into work in the morning. But it's also miserable, because utterly amazing songs end up being rejected by boring, play-it-safe televoters from their host countries.

Probably the best example of an utterly amazing song being cruelly cast aside in its National Final came from Norway's Ida Maria in 2018. Ida was basically a fringe indie artist in Norway a few years back and was almost a superstar - she did Jools Holland, appeared on Jay Leno and even played one of those minor stages at Glasto that Jo Whiley cuts to if her guest is swearing. For whatever reason (one of which, I suspect, was her abject refusal to be told what to do by her record label) she never really made it, but then January came around and NRK announced her as one of their MGP artists and I heard it and... well.

You might think having read this blog that I'm a vile, lonely, self-hating arsehole who derives no joy from colour, nature, other people or music. You're partly right. I'm working on it. You might also wonder why, having slated almost every song so far, I obsess over the Eurovision, watching national finals and collecting memorabilia and dragging myself and my increasingly thrilled wife around Europe to actually watch the thing in person every year.

Well I'll tell you why. Songs like Scandilove. A joyful, life affirming, fantastic, hilarious, satirical, derivative scandipop song that grabs you by the face and hugs you tight and reminds you what love feels like. Oh my days. It's a foot tapping, hand clapping work of absolute pop genius and I loved it. The song was slick, the production was contemporary, the lyrics were funny, the beat was infectious, and to top it all if you gave it a couple of goes you could literally sing Paul Simon's You Can Call Me Al over the top of it and you got this endorphin rush feeling like you've cracked the fucking Da Vinci Code or something.

Sadly two things cursed it. First, her performance on the night was breathtakingly shambolic. She'd been ill for weeks and was hepped up on goofballs, giving the overall impression that she'd been out on a £1m bender in Bergen and woken up in Oslo in someone else's stag do suit. The sweat was pouring out of her, she managed to fall up the stairs halfway through, she fluffed the biaaaaaaaatch line and there was the constant fear that one of the sixteen distracting stunt cheerleaders being bounced in the air in the background was going to be hurled to the floor and break their neck.

He’s apparently very popular in Norway - he grew up with Tourettes and was named “Tics’” as a result, and the song is about telling his background story and showing the Norweigan people that “there is always light in the end of the tunnel” and that “even an ugly duckling can become a swan”. The problem is that he’s singing his bang average man ballad in Norweigan, so unless you’re fluent you’re just sat there thinking look! Maggot from Goldie Lookin Chain recreating Croatia 2019!

Mind you, I'd rather have TIX in my head than Norway's 1978 entry, sung by a man screaming out the words "enter me, enter me" in a pair of red trousers and oversized sunglasses.