At the centre of the rifts where everything explodes 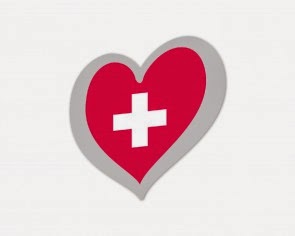 I have an entirely unjustified soft spot for the Swiss, which I think is derived from hundreds of summer mornings spent watching badly dubbed episodes of Heidi from behind the sofa. That Goat Peter. What an asshole!

It's unjustified because they are so rubbish at Eurovision that they make us look like the Swedes. We've seen it all. Vampires, golden showers, terrible English ("sweem against the stroom" indeed), four generations of the Salvation Army, ena stupendo and an ena stupendously annoying twiddly dee folk song performed by a smug pillock in a waistcoat. Cuckoo clocks the lot of them.

You know what the fellow said – in Italy, for thirty years under the Borgias, they had warfare, terror, murder and bloodshed, but they produced Michelangelo, Leonardo da Vinci and the Renaissance. In Switzerland, they had brotherly love, they had five hundred years of democracy and peace – and what did that produce? The cuckoo clock.

This year's chunk of bland swiss cheese comes courtesy of awkward manboy Gjon Muharremaj, who haiols from from Broc in the Canton of Fribourg and has dedicated his heart and soul to music since he was little. The singer's story began when a childhood rendition of Elvis Presley’s Can’t Help Falling In Love With You moved his grandfather to tears. And that provided the inspiration for his stage name, Gjon’s Tears “I want to use my music to move people in all sorts of ways, whether it’s joy, sadness or melancholy.”

See? It's this year's cuckoo clock. People thought “Tout l'Univers” could win when it first emerged but they are very stupid indeed. It’s not the “music they use in car commercials” contest.

Don't push my wheelchair down the hill, Goat Peter! Oh - not to worry. I can walk. It's a miracle. And now, Heidi, I'm gonna celebrate like it's 2004.