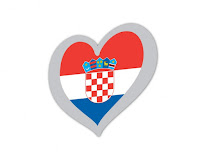 Those were the days. Back in the noughties bookies still regularly placed the UK in the top 5, and we were still completely baffled when phone voters around the living rooms of Europe failed to vote for whatever tuneless noise we'd spat into the content that year.

"The UK was robbed!", we'd say, like we say when we lose at every international competition involving a level of competitive skill ever except the Darts. And even that bloke off the Darts is dead now.

But try being Croatia. Amazing Spice Girls knock off act ENI obviously deserved to win with this work of almost complete genius, but only came 17th in 1997. This spine-tingling work of genius from 2010 from a girl group who put the F into Eminem somehow didn’t even make it to the final. Or take Doris Dragovic's haunting "Maria Magdalena", which somehow only scraped fourth in 1999. For a good 18 months this solid gold classic was my ringtone, my alarm clock and my start up sound on Windows XP.

The trouble is there’s always something just a bit off, just a bit missing about the Croatian entry - and this year’s ode to the social media network popular with fourteen year old girls and their creepy uncles is no different.

It says here that Albina delivers a vibrantly passion-filled performance that echoes the pulsing energy that flows throughout the song and showcases the natural power within her phenomenally compelling vocals, but to these ears while it whoomps along competently enough at 126 bpm with those squelchy ‘orns and all, the problem is that it’s all utterly forgettable three minutes later - apart from a hooky bit that has Albina singing “oh no, oh no, oh no oh oh oh oh” which is unlikely to motivate addled televoters on their fifteenth glass of schnapps.

Obviously the bigger problem with the song from Eurovision fans’ point of view is that it’s not a patch on Ukraine’s Mariya Yaremchuk’s song Tick Tock from 2014 that had that bloke in the hamster wheel that ended up being parodied in Måns Zelmerlöw and Petra Mede’s Love Love Peace Peace two years later in Stockholm. “If you make it unforgettable, you will be the best, and win the Eurovision Song Contest” they sang. If only Croatia had taken the advice.

My all time favourite Croatian entry, by the way, was Severina's "Moja Štikla" from 2006, the first year me and Mrs D went to see the contest live in Athens. The costumes! The dancing! The Eukulele! The bit where she sings "Shits, Shits"!

As Justin "difficult recovery from alcoholism" Hawkins said on our 2007 national final, they don't make them like they used to.