We'll never be more alive than right here and now 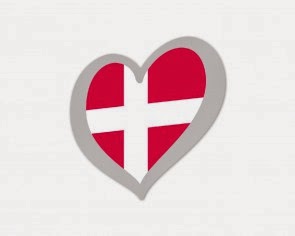 And so to Denmark, home of The Killing, the Borgen, one half of the Bridge, the Carlsberg, the Lego, the (highly underwhelming) Little Mermaid, the Hans Christian Anderson, those butter cookies you get in tins, a friend in London (because everyone has A Friend In London), these tasty looking Christmas Donuts (nom nom nom) and Emily. You know, Emily. Her off the forest.

I love Denmark. It's small. They drink (reassuringly) expensive beer. The public transport's good. They have a theme park right in the middle of their capital city. Tax is high (I like that). And it's the kind of place where you can be out browsing well designed and expensive kitchen goods when "bang!" there appears indie pop outfit Alphabeat, buying a flourescent green ladle. Although on reflection it's precisely that sort of easy living that killed the young dudes in the high boots.

So I was proper excited when the contest was held in Denmark in 2014, and what a contest that was. You know that old saying about rounding them up and putting them on a island? That is literally what the Danes did, chucking Eurovision and its 30,000 onsite fans onto a drizzly building site island complex complete with festival toilets, festival beer and a leaky press tent, busting the budget by a record amount in the process and gaining precisely 0 extra tourists as a result. Tack!

In 2018 they abandoned their standard bland mid-tempo inspirational in favour of a kind of novelty Game of Thronesey Viking act - (Jonas Flodager) RASMUSSEN singing about MEN and SWORDS and SHIPS and WAR with RED HAIR and a MASSIVE BEARD. Turns out he wasn't quite the warrior he was making out - he was actually the lead singer and frontman of Danish 80s covers band Hair Metal Heröes and in the week worked as a school teacher in Viborg - a sort of Danish Dewey Finn who torrented GOT and put some silly words to a bit of trailer music he found on the internet.

I'm talking a lot about the past because this year's entry is fuckaclysmically awful. It’s genuinely one of the worst things I’ve ever seen entered for the contest, and I’m including that time when Albania entered a woman having root canal done and the time when Israel entered a comedy song about a woman on a kibbutz singing "I want, I want" into a cucumber who was having an affair with a man from Damascus and caused an international incident involving Syria in the process.

First for some reason DR1 turns around to last year’s heart-melting winners Ben and Tan (I mean this follow up was adorable) and instead of “saying yes” to their request to come back this year, they “said no” - and told them to take their lovely bit of jangly forest-pop “Iron Heart” that they’d written especially for this year and get lost.

Then in a national final of abject, offensive mediocrity (although not as mediocre as the year they found Whigfield in a skip) the Danes managed to winkle out the one song that sounds most like a huge Danish crown being scraped down a massive pane of Danish glass - a vile, unlistenable 80s throwback that sounds like the theme music to a VideoArts course on meeting skills, overlaid with a hammed up and tracksuited Danish comedy act whose lyrics include “so let's practice on each other, soon we are two adults, you are the woman, I am the man, the whole place has gone out of its mind”. Well yes.

The DR1 press release says that Fyr Og Flamme are “Teenage idols your parents can relate to” which is why your parents are now locked into a bitter and acrimonious divorce.