There is no apocalypse long as you're here on my lips 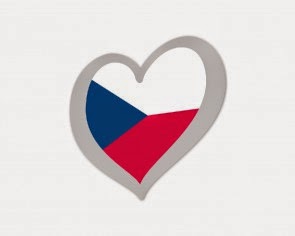 
There are some countries that really try. They have big national finals and send talented try-hard X Factor rejects and hire big name songwriters and blow half their GDP on staging and go to all the preview parties and film a lovely touristy postcard. And then there's Czechia.

This year is the fifteenth year in a row they've entered without the Slovaks, and every year has been rusty nail in the foot rubbish. Their underwhelming debut in 2007 consisted of three mechanics from Kwik Fit morbidly growling, a (lack of) effort that earned them precisely one point in the first semi, from Estonia.

Things didn't get much better in 2008 when they entered overproduced "something for the dads" act Tereza Kerndlová, whose flat vocals were tempered only by the inclusion of a winged DJ imploring us to "Have some fun". We didn't, and they scraped 1 point from Turkey and Malta, 2 points from Croatia and 5 points from Macedonia in their dismal semi.

In 2009 they entered the Czech Republic's answer to Goldie Lookin' Chain - an entry that featured Tim Westwood in a luminous unitard, flanked by an Amy Winehouse lookalike artist and a handful of men who looked like waiters at a novelty tourist restaurant. On the night the Czechs received nul points from the 20 countries voting in that semi-final, becoming the 16th entry to achieve this result since the current voting method was introduced in 1975.

And so on and so on to be honest, until we get to this year’s competitive snowboarder, tennis ace and master of Brazilian jiu-jitsu, Plzeň-born performer Benny Cristo. It says here that Benny’s roots span from the Czech Republic all the way to Angola (his mother and father’s respective birthplaces), and it’s his ability to fuse a range of global genres that broadcasters Česká televize (ČT) believe could give Cristo the edge at the contest.

Blah blah vegan, blah blah animal rights activist, blah blah advocate for plastic bottle disposal schemes, blah blah educator of children on the dangers of the internet. It’s a dull, slightly over-produced bit of electropop that might creep onto the Radio 2 C list in January that goes nowhere fairly fast, and leaves you wishing you could have the luminous unitard man from 2009 back.

Guess what, fact fans! The Czech Republic has the highest castle-density in the world! There are 2,000 to Czech out! And "Czech out" is also what Benny Cristo will be doing from his hotel the morning after his semi.