Thought I had a cloud over my head 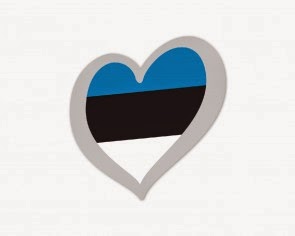 Estonia
Uku Suviste
The Lucky One

My favourite Estonian entry was their 2003 time travel smash "Eighties Coming Back" by Ruffus. Watch that video and suddenly you're there - not in the 80's, but in your living room in 2003 knocking back liquorsave gin and own brand frazzles with people round that you've since blocked on twitter. In this version you can even hear Wogan sounding a bit pissed blithering on about accordions and incorrectly predicting that "Baltic block voting" would work in Estonia's favour. The daft racist - it came 21st.

There was a time when the Estonians would enter "five girls in the playground pretending to be the Spice Girls" dross like this, but these days Estonia have an upsetting selection process that every year takes a ton of interesting and unusual indie stuff and slowly knocks out all the quirks until you're left with something pointlessly bland and generic. Back in 2013 for example they could have sent unpleasant multicoloured unitard punk band "Winny Pugh", but instead opted for this toilet break ballad that can't even be bothered to deliver the key change it barely builds up for. What an absolute bunch of clowns.

This year we almost had this man screeching what I think are the words “Bruce Lee” down the camera while a man behind him waves a mask about in an almost certainly racist way. We probably dodged a bullet there, but it was a shame not to see this woman have wings attached to her in the middle eight that the dancers didn’t snap while attaching them, we’ll cry no tears over losing this aggressively transphobic Covid-19 denial rock song called Alabama Watchdog, and as for this Tanja, we may have to agree to disagree - because your mum and her mate from work look like they’re having a much better night than you to be honest.

They were all whittled away of course, and as a result it's difficult to overstate quite how dull AI-designed chiselbot Uku Suviste’s winning entry is. I mean for god's sake. Fascinating facts in the press release include "the entertainment industry flows through Uku’s veins" (that sounds like a disorder mate) "the verses came first, then the chorus" (then the nausea) and "Readers of renowned Estonian magazine Kroonika voted Suviste Estonia’s sexiest man". Sexy indeed, if you're the sort of person that used to get turned on while gawping at the animatronics on Prof. Burp's Bubble Works.

The song is a cold, bland, emotionless by-the-numbers mid-noughties mid-tempo mid-market uninspirational, and Uku is a big posh sod with plums in his mouth, and the plums have mutated and they have got beaks. He makes pigs smoke. He feeds beef burgers to swans. He has big sheds, but nobody's allowed in. And in these sheds he has 20ft high chickens, and these chickens are scared because they don't know why they're so big, and they're going, “Oh why am I so massive?” and they're looking down at all the little chickens and they think they're in an aeroplane because all the other chickens are so small. Does he deny that? No, and I think his silence speaks volumes.

Oh, and just like Anxhela Peristeri from Albania, Uku has done blackface on “Your Face Sounds Familiar”, although unlike Anxhela Peristeri from Albania, he’s chosen neither to acknowledge it or apologise, hoping instead that it will all go away. He’s also recorded a song for the Estonian military, his fantasy ice-cream flavour is “funky track”, and his favourite Estonian sport involves watching husbands pick up their wives who then race several hundred metres with their better halves upside down on their backs, with legs over the husbands’ neck and shoulders, down a with two dry obstacles and a one-metre deep water obstacle. According to local legend, the contest dates back to the 1800s when a local bully challenged other men in the village to prove their worth by carrying their wives through an obstacle course. The contest was revived in this new form in 1992 and unpleasant coiffured misogynists like Uku have been cheering it on ever since.