Hotter than sriracha on our bodies 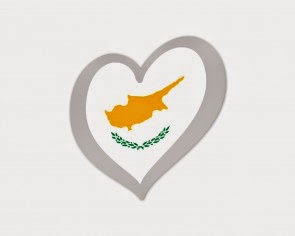 And so to Cyprus, where they drive on the left and launder Russian money. You know, like London only warmer.

We used to go to Cyprus on holiday when I was a kid, and I was always badgering to go visit that haunting disused airport in Nicosia but instead we just seemed to visit pirate video shops to buy grainy copies of the Goonies than ran out before the e

It's not cheap entering Eurovision you know. There's the entry fee, flights, hotels, ridiculously overpriced souveniers, half a ton of cocaine, and flags for the delegation to be acquired - not to mention the ever present fear that you might win the thing and then be stiffed with shelling out on hosting it the year after.

So after their financial collapse and big banking bailout in the last decade, times were tough for the Cypriots, with their entries having to become ever more creative about the financials - they sent their singer on her own in 2013, they've found record companies to sponsor the entry, and when Eleni’s Fuego almost won, state broadcaster CyBC had to do a deal with Fyffes - the fruit people with the funny little stickers - to afford the air fare. Oh look! There's Eleni with a pineapple! Ooh er- there's Eleni with a bunch of bananas! That sort of thing.

Anyway this year’s song seems to have caused a bit of religious backlash. The Orthodox Church of Cyprus reckons that Elena Tsagrinou's “El Diablo” promotes devil worship because of the line “I gave my heart to El Diablo”, but Elena says the song is, in fact, about an abusive relationship.

Presumably the abusive relationship she speaks of is with this year’s sponsors who in the video make her sit next to a couple of bottles of dandruff shampoo, pour it suggestively into her hand a minute later, and then gratuitously hold up a bottle of BlueSky nail polish to the camera with all the subtlety of a shop-soiled Chocolate Orange from Rawlinson’s.

The song is absolute trash - it’s like the worst bits of Lady Gaga’s Bad Romance and Alejandro have got off with Rita Ora’s Anywhere round the back of the bins at Morrisons and topped it off by nicking the video from Zara Larsson’s Love Me Land.

Maybe she’ll appear at the rehearsals with an amazing live vocal or something, maybe the Russian roubles will see Elena do better with the juries than she ought to, and you can’t fault a lyric like “all this spi-cy melts my i-cy edges baby it’s true”, but this has got “roughly 15th in the final” written all over it.