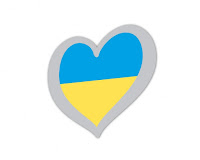 You are so sexy BOM. Gonna make me crazy BOM. We’re gonna do the BOM BOM. Ain’t that amazing BOM.

Those were the days. You used to be able to rely on Ukraine to bring some uptempo cheer - like when Tina Karol danced to an accordion number, or when Ani Lorak did Shady Lady, or when Verka Serduchka did that one nobody knows the name of (It was “Dancing Lasha Tumbai”, you ignoramus).

Naturally given the geopolitics their entry went a bit heavy the other year and recounted Stalin’s deportation of Crimean Tatars from their native Crimea. Jamala opened with these cheerful lines: “When strangers are coming, they come to your house; they kill you all inside [and say] “We’re not guilty, not guilty” and obviously won it.

It’s all been a bit dour since, and this year’s no different - Go_A are an electro-folklore outfit that specialise in the “modern retelling of traditional Ukrainian stories that have already passed through many generations by word of mouth”. Bleurgh.

They’re probably quite impressive live and the fan blogs are suggesting that this is a very well-staged entry, but this just sounds like fairly unforgiving noise to me, punctuated by a particularly piercing tin whistle. This bit when it speeds up at the end is fun, mind.