When you have to fight the agony 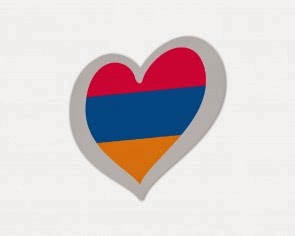 Sadly, the Pyreneesian principality of Andorra isn't taking part again this year, which is shame because this was an absolute banger. And this. There's loads of great facts about Andorra too- women live longer than men, it has an army of 12 people, the eldest able-bodied man in every family is required by law to keep a loaded rifle, and as a co-principality it's ruled by two princes! Princes who adore you! Just go ahead, now.

So instead here we are in Armenia. I used to love Armenia. A few years back they were responsible for sending a woman called "Sirushu" to Europe - a top pop star singing the brilliant end-of-an-era ethnopop banger "Qele Qele" (let's go! let's go!) which has ended up one of my all time favourite entries (and provided the name of this blog). Also, chess is compulsory there in schools, they have the world’s longest cable car ride and best of all, they all LOVE the underrated fruit of apricot. Boom Boom, Chaka Chaka.

I say used to. When they announced that they were sending Srbuhi Sargsyan off of X Factor Armenia 2011 (now known as Srbuk), I was all set for a trip in a van to Yerevan in 2020. But then AMPTV went and spoiled it all by lumping her with this plodding mid-tempo female "empowerment" effort. "When I first heard the melody...", (I mean I've not heard one yet), "...visions flashed before my eyes". Visions, presumably, of wretching over a bowl having eaten a dodgy takeaway in 1998.

Ooh - there's a cheating scandal! "Me and my Eurovision team were looking forward to reaching 1m views of our video on Youtube. And our joy was indescribable when we saw the figure reached 2.5m in one hour and continues to grow swiftly. We have already contacted the official channel of the Eurovision Song Contest to find out if there is any problem behind the fast growing indicator. 1 will certainly notify you of the news". No notification has, as yet, been forthcoming.

It says here that Srbuk's influences are Stevie Wonder, Ray Charles and Michael Jackson, and that all of these influences and experiences culminated into her debut single as a solo artist titled Yete Karogh Es "which was on top of the Armenian charts for two weeks". Maybe she's been listening to different Stevie Wonder, Ray Charles and Michael Jackson albums than the rest of us, but there's no doubting that "Yete Karogh Es" was a banger. As was her follow up, "Half a goddess". "Walking out", on the other hand, is not. It's sharp punch in the face rubbish, and if it gets out of the semis I'll eat 100 apricots.