Ok, put your favourite sneakers on 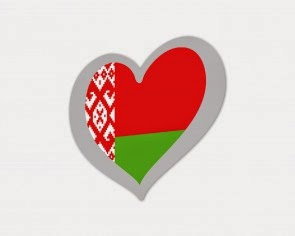 And so to Belarus, "Europe's last dictatorship" Belarus, home of bonafide Eurovision classic "I love Belarus (got a dick inside)". Listen if you don't believe me.

It's not the only bonafide Eurovision classic they've produced. One of the songs that remains on my iPod to this day is 2006's Polina Smolova writhing around in hot pants singing a song both called, and about, her "Mum" (she was so proud). Or there's 2007's amazing singing David Copperfield tribute act Dmitry Koldun's "Work Your Magic". Or 2009's contest winning folk on coke number "Fairytale" from Alexander Rybak, which would have been Belarus' had Alex not reasonably surmised that out of the two parents' nationality he could pick, Norway would spend more on the staging. And the coke.

The Belarussian national selection is quite extraordinary, because unlike most other countries, they live stream the auditions for their national finals over 14 desperate hours. This year's treats included Lyudmila "your mum" Rozum singing "Wife Love" (even when the judges had cut the music), a couple of swingers with all the sexual chemistry of an enema, Maria Cherepovic ("I was born to be happy" she warbles, looking like someone from the Belarussian military has a gun pointed to her head slightly off camera) and even that accordian bloke from BGT 2016 singing "Potato! Potato! (Aca-acapulco)".

At one stage I thought I'd drifted off to sleep and was imagining it, but no - it really was Daz Sampson off of the UK's entry in 2006, auditioning with a pink haired woman called Nona singing "Kinky Boots", with lyrics like "I’m a sexy bitch, I like to strut my stuff" and "Slutdrop the floor, there ain’t nothing you can do" whilst creepy schoolgirl aficionado Daz "raps" hateful lyrics like "This crazy bitch, she ain’t a witch", "On the scene, living the dream", "Work it, twerk it, here we go", and the remarkable "Wham bam, thank you maam - with a hashtag, KB, Instagram".

It's easy to forget (especially when you didn't know in the first place) that at one point in the UK music industry's illustrious history, Daz Sampson could do no wrong - in the early 2000s, his genre of what he delightfully called "scumpop" was everywhere, spawning hits like his offensive cover of "Rhinestone Cowboy (Giddy up, Giddy up)", a despicable cover of "Kung Fu Fighting" ("He's got a white suit on,  five past One and the night has just begun" and even Hall and Oats' "Out of Touch", performed here by Daz and Nona in Poland in 2017 where amusingly they "forgot" to turn his mic on, resulting in the 30,000 poles present unable to hear him rapping lines like "I'll pick you up and take you on, go pound for pound coz I'm the only man'll please ya".

He also had hits like this cover of Baltimora's "Tarzan Boy" where two models rub their bottoms in his face, this haunting cover of "Yippe I oh" ("I want to put it in, I want to pull it out, in out in out waggle it about") and my personal favourite - a disco version of 80's novelty hit "Incantation Cacharpaya" called "We Play the Pipe", whose video features Daz and a sidekick wandering around Preston town centre dressed as Mexicans (carefully avoiding the students' union), like two lads on a stag do that are much less amusing than they think they are that you fantasise about hitting hard in the face, but instead you just tut and stare at your phone.

Sadly he didn't make it to the live final, which was eventually won by a young woman called "Zena", who's grown up quite a bit since she appeared in Junior Eurovision dressed as a noisette triangle.  "That was then. Now I communicate with adults as equals", she says in the press blurb, "and many people confuse it with star disease and even reproach me. I do not want to be an amoeba in show business". Fair enough Zena, but you're singing a wafer thin B&M Bargains pop number from 2011 called "Like it". I suspect that most of Europe won't.